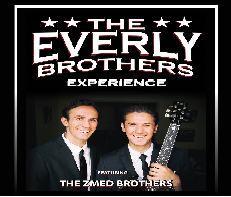 × The Everly brothers career lasted over half a century, they recorded 21 studio albums, sold more than 60 million records world wide, had over 30 billboard top -100 singles, which still to this day is the record for most billboard charting hits of any sibling rock duo ever, they received numerous accolades in their later career, and influenced countless legendary artist that came after them including The Beatles, Simon and Garfunkel, The Beach Boys, The Rolling Stones, Bob Dylan, The Bee Gees, Neil Young..and the list goes on. THE ZMED BROTHERS are absolutely thrilled to be able to contribute to a cause that supports the recognition and preservation of the intimate and singular origins of America's greatest Rock n' Roll singing sibling duo.